PURPLE. Purple is this year’s theme color, overusing purple is great! Don’t be afraid to let the background carry this color and don’t be afraid to push “purple” in a different ambient color to fit your image better.

Please use the Josefin Sans font for the text in your work.

Use either the Regular or Bold Italic flavor depending on the context.

The musical takes place in a world where everyone is already an anthropomorphic character. Some of these characters have “Fursonas” of other animals that they feel better matches their personality or they identify with. These people hold conventions to get together with other people who have Fursonas or are just fans of a lot of the art. The world is basically the same as ours, and at a convention like ours. You will see lots of characters in fursuits just like during BLFC along with the hotel and casino settings, though everyone who isn’t in a fursuit, “Furry” or not, is an anthropomorphic character.

Our story takes place at one of these conventions.

Played by: Levi Jackson A dog who’s fursona is a rabbit. Young adult. Works a job in a clothing store to pay the bills, but has no love for it. Lives on the east coast, far away from Clover and Sahny. Very schedule oriented. This convention is his first, and he is excited and nervous. Also very excited to meet Clover in person for the first time. He is constantly looking at his phone to check his schedule and revises it constantly before arriving. He relies on his phone a lot, consequently, he always has it with him and is nervous when he is disconnected or gets no signal with it, or it is at risk of dying. 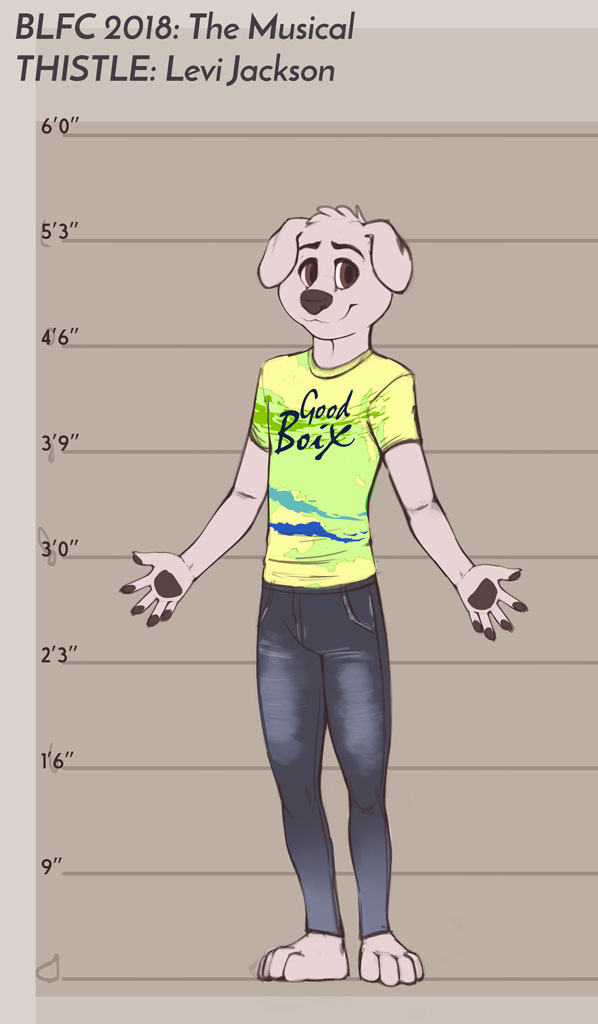 Played by: Jesse Dook A bear who’s fursona is an eagle. Adult. Calm and collected. He used to volunteer at cons, but stopped because he wasn’t getting joy out of it anymore. Helpful in nature, he’s like a gentle giant. He also tends to make sure everyone in a crowd is OK and taken care of. Prefers his drama to be on TV instead of in his life, and tends to avoid it. 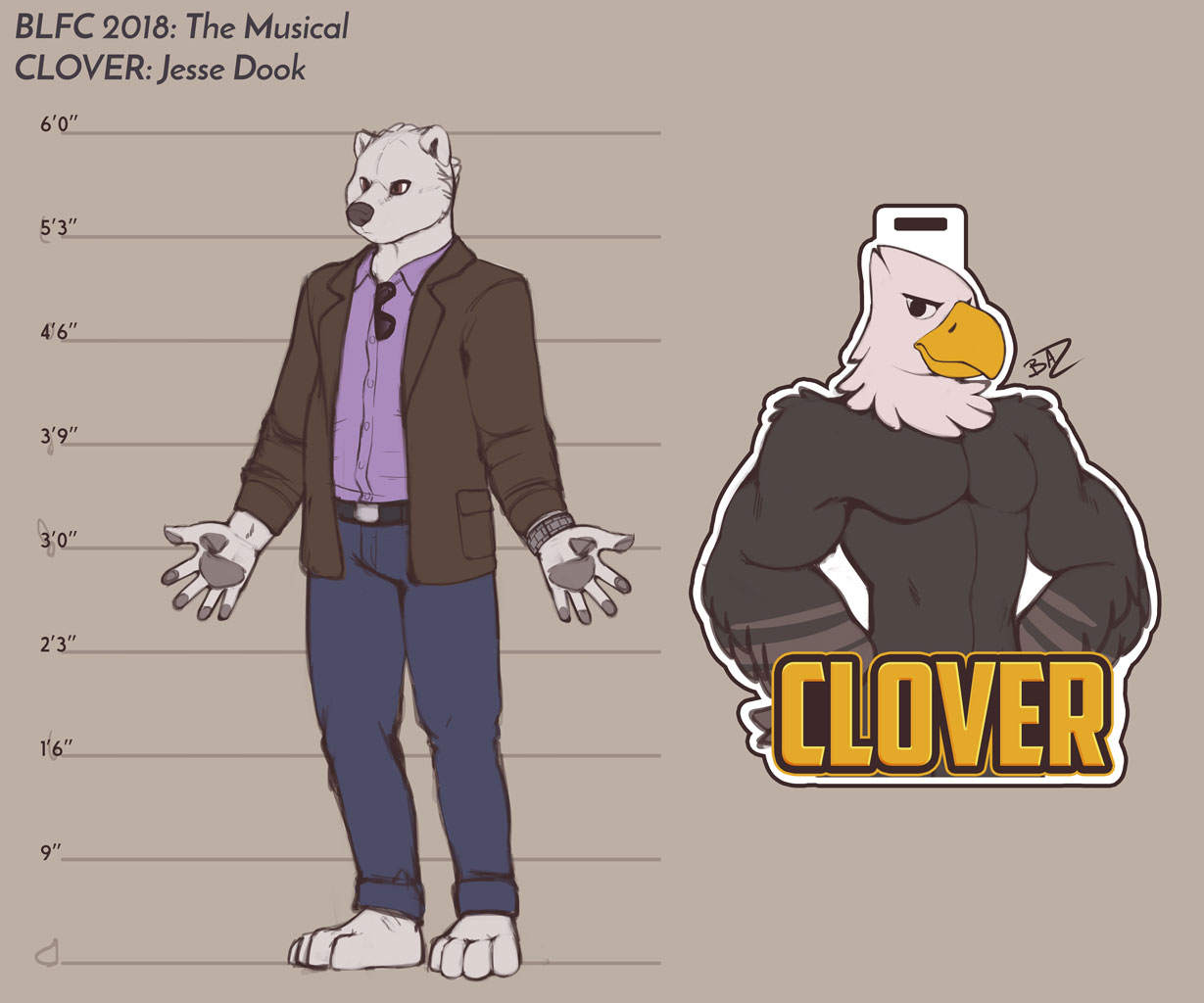 Played by: Brianna Antilles A sergal who’s fursona is a horse. Adult. She is here to make money selling her art in the dealer’s den. She shares a table this year with an artist whom she admires, dauB. Tends to be very business oriented, it takes up much of her life, as her art is her sole source of income. 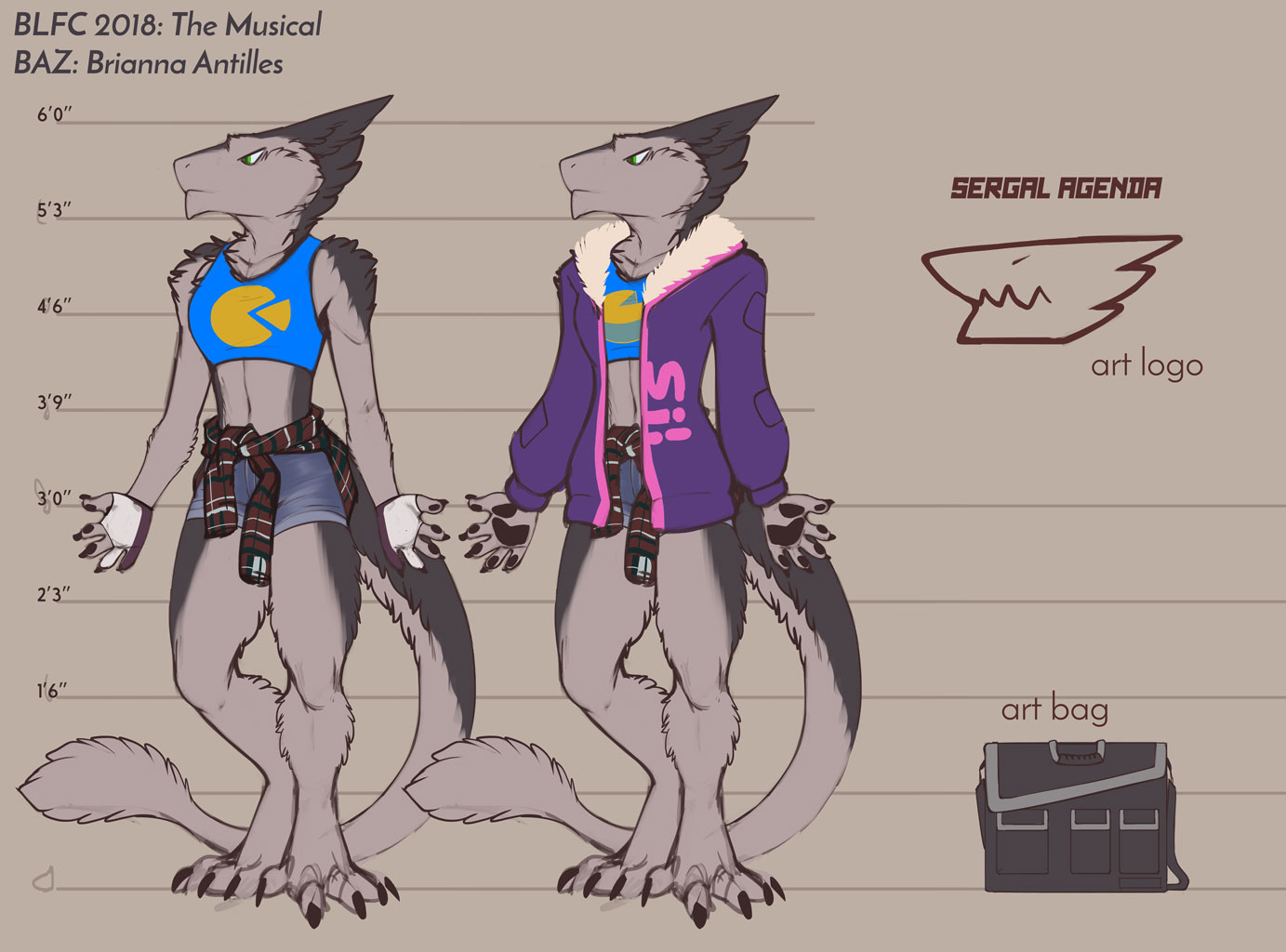 Played by: Sam A. Parker A hyena who’s fursona is a deer. Young adult. Nonbinary, uses them/they pronouns. Loves to party and drink all the booze. Wants to be a “popufur” and really idolizes Keystone, a famous character in the community. Very carefree to the point of their own detriment. Lives very in the moment and is not concerned with planning at all. 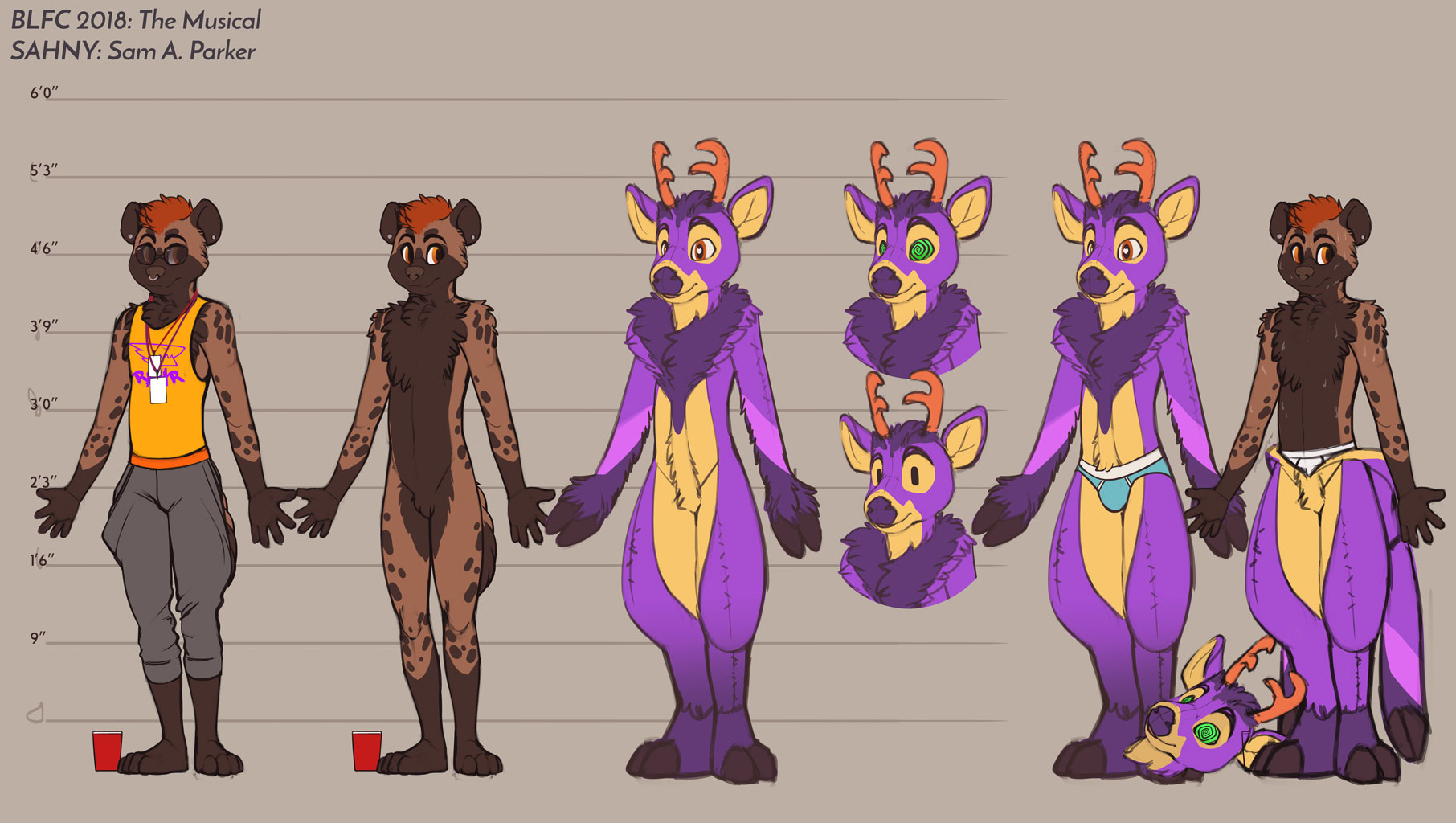 Played by: Viottolo D’silencia The hyena con chair whose fursona is an arctic fox. Adult. Very nonchalant about running the con, worry-free and convinced everything is going well. Incompetent and uses his position in the community to get what he wants.

Played by: Milo Sybre Baranov A white tiger that dyes his fur to be like a golden tabby (his fursona). Adult. 6’4” tall. Is very large but wishes he was smaller. Calm and knows everything will be ok, so he worries less than Baz. Very passionate about his work, but not as uptight about the business aspect of it. 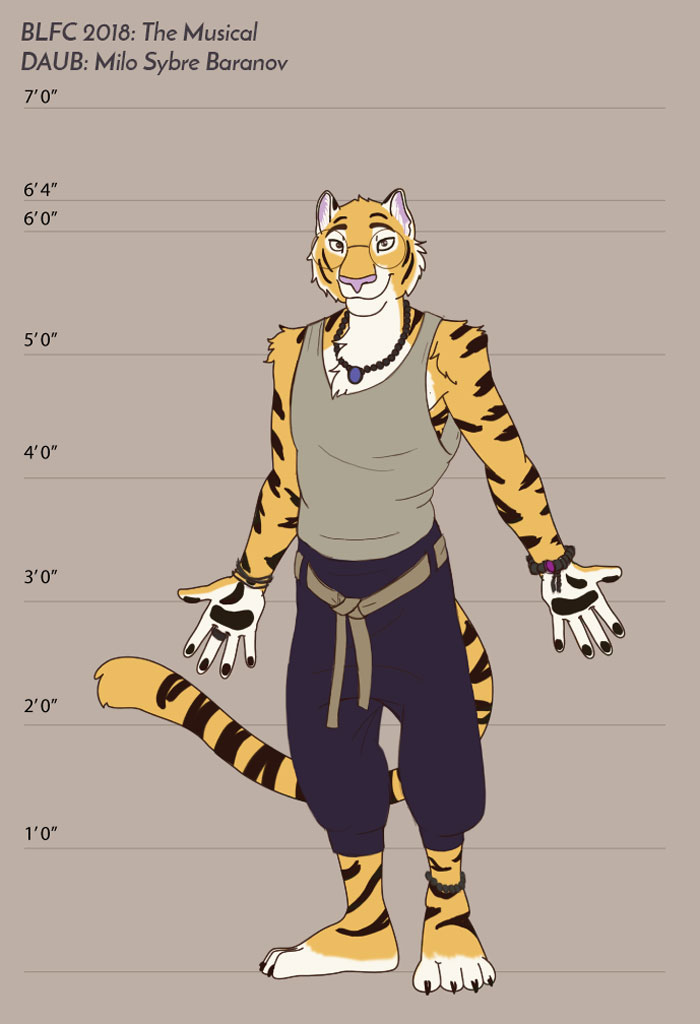 Played by: Amani Naribi Dressed as a tan and brown Dutch Angel Dragon with antlers, this popufur is a well known fursuiter in the community, despite most not knowing what they even look like and usually communicating through squeaks and whistles.

What are some things you’ve seen at BLFC? Maybe a funny experience you had could be happening to a background character.

These are a few general rules & guidelines of material we will reject or look forward to having.

Exceptions can always be made just be sure to have it cleared with the BLFC Art Lead (art@goblfc.org)

Personal Characters
While we do not mind personal characters being drawn and included in the BLFC Art portfolio, please do keep in mind that these drawings are meant to be used for website, convention book and products. We do ask that usage of personal characters be kept to characters that aren’t overtly unique. As attendees should be able to easily identify themselves in the characters portrayed.
Non-disclosure agreement (NDA)
You don’t have to keep any of the information in this document private. This document is freely available to all attendees. You are not signed on to an NDA.
Resale
The characters shown are integral to the story, if a scene is about them they will be in it. Characters in the background are free to be whatever you wish, you have free reign! Feel free to put in yourself, your friends, or others just having fun at the con! You are permitted to make merchandise and sell said merchandise from your creations!
BLFC Usage of your work
BLFC will use any images submitted for the website, convention book, posters and advertising. BFLC will make sure your signature is visible and provide a link to your art gallery. BLFC WILL NOT use your work for “for profit” products without your expressed and written permission on each product. Should you desire, you may request to approve each specific usage of your work.

Art Assets
The following OneDrive contains the art assets that will contain files referenced within this document. Art asset folder
Layered Files
We are looking to be able to edit these files ourselves to make it easier to fit the images into flyers, the website and for other uses. We are looking for a semi-flattened file at the end, in which each character is its own layer separate from the background layer. IMPORTANT: Keep your signature on a layer by itself. Sometimes we may need to crop artwork and we do not wish to crop your signature, allow us to move it to new location as necessary.
File format
Please submit all art as a .PSD or .TIFF layered file to art@goblfc.org
Minimum dimensions & DPI
DPI: 150 DPI preferred. 300 DPI Greatly appreciated.

This is a historical archive! For up to date information: